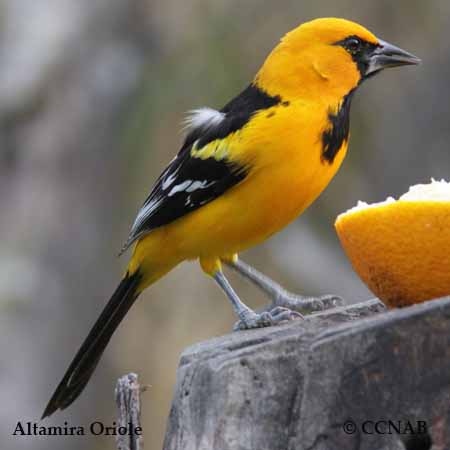 Species; The Altamira Oriole (Icterus gularis), is the largest member of the oriole family seen in North America. It is found in southeastern Texas along the Rio Grande. This oriole is a regular visitor to bird feeders as it is attracted to oranges and other types of fruit.

Distinctions; This mostly dark orange bird, is identified by its orange head and body, a black mask around its eyes and bill which extends down into a black bib. Male and female birds have the same plumage, whereas the juvenile will show more of an olive green on its back and tail rather than black. The adults have black wings and tail feathers with yellow scapulars and white wingbars.

Nesting: Three to four pale blue eggs per brood. Orioles build their nest high in the crown of trees and sometimes on a utility wire. These nests are in the shape of hanging baskets, attached to a limb with long basket-like handles. The nests are built from plant fibre, bark from branches, grasses, strings and any other such materials that can be manipulated. 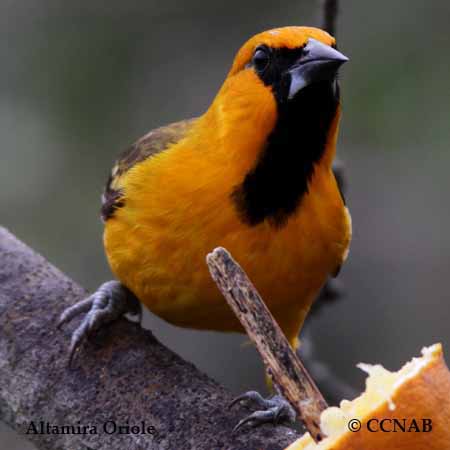 Distribution: The Altamira Oriole was first reportedly seen in Texas in the 1930's. It is a common bird seen throughout Mexico and Central America but is considered threatened in the USA. This bird species is non-migratory. It is suspected that the male and the female are monogamous and are partners for life.