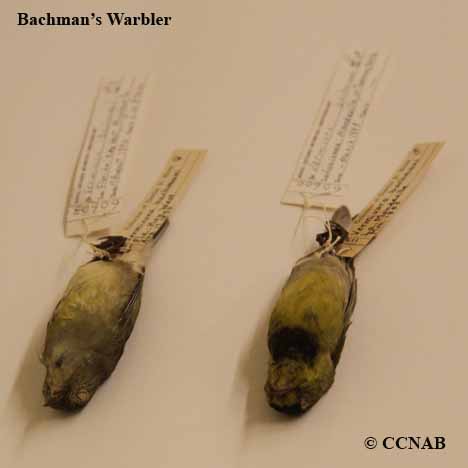 Species: The Bachman's Warbler (Vermivora bachmanii) is probably extinct, with no sightings in North America since 1962 and the last confirmed sighting was in Cuba in the mid-1980s. It was first discovered by the reverend John Bachman in the early 1830s. This bird species was reported as a rather common warbler in the 1800s but became rare and endangered by the 1900s. The Bachman's Warbler was found in the swampy areas of the southeastern states, where it is thought to have made its nest in canebrakes, a form of bamboo thicket. It is speculated that its demise was due to the loss of habitat, through logging and the forming of settlements

Distinctions: The male has a black bib, yellow breast, chin and face, dark cap with a bluish gray crown and an olive-green back. The female is somewhat similar without the dark bib or black cap. Both sexes have thin curved bills and show a large area of white in their undertails.

Voice: Nasal or buzzy tone notes, similar to the Blue and Golden-winged Warblers.

Nesting: Three to five white eggs. Suspended from a fork in branches of undergrowth or canebrakes. The nest is composed of fine grasses, leaves and Spanish moss. 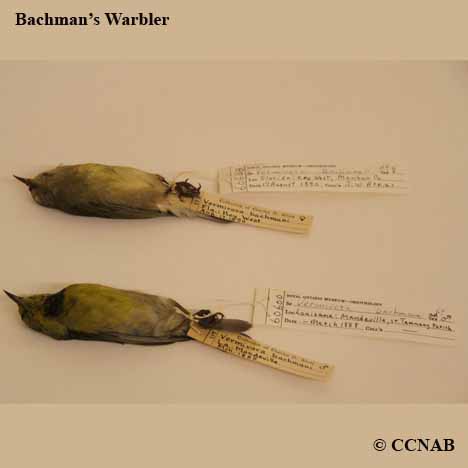 Images of a female and male Bachman's Warbler, courtesy of the Royal Ontario Museum, ROM, located in Toronto, Ontario, Canada.

Distribution: The Bachman's Warbler was found in swamps and bottomlands of the southeastern states. It was never known to be an abundant bird. Unfortunately, these birds were shot and killed by collectors, as they migrated through their known Florida corridors. It was seen in North Carolina, west to Missouri, south to Louisiana and east to Georgia. It migrated through Key West in the state of Florida to Cuba and to the Isles of Pines during its migration periods.