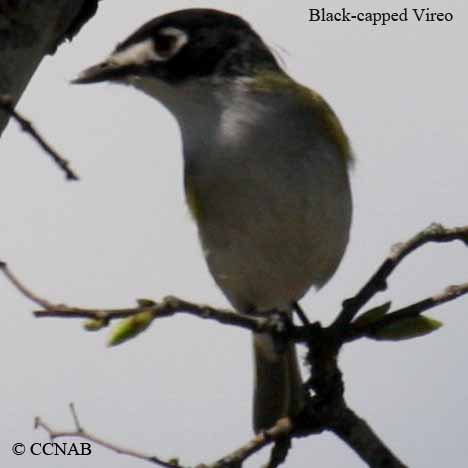 Species: The Black-capped Vireo (Vireo atricapilla) is one of the smaller vireos seen in North America and is mostly found in southern Texas and into Mexico. This very attractive vireo is an endangered bird, who finds its habitat in rocky hills, living in scrub oak and undergrowths. The bird's decline is thought to be caused by parasitism by the cowbirds, which lay their own eggs in the vireo's nest. This small active warbler-type bird feeds mostly on insects.

Distinctions: Among all the vireo species, the male and female can be identified separately. Both sexes have white lores and white spectacles, whereas, the male has a dark crown, nape and cheeks and the female has a gray crown, nape and cheeks. Both have olive green bodies, two yellow wing bars, greenish-yellow flanks, white throat, breast and undertail. Both sexes have dark primaries and tail.

Nesting: Three to five white eggs, as many as two broods per year. The cup-shaped nest is suspended from a fork in branches of a small tree or bush. The nest is composed of strips of wood bark, plant fibres and lined with fine grasses and spiderwebs. 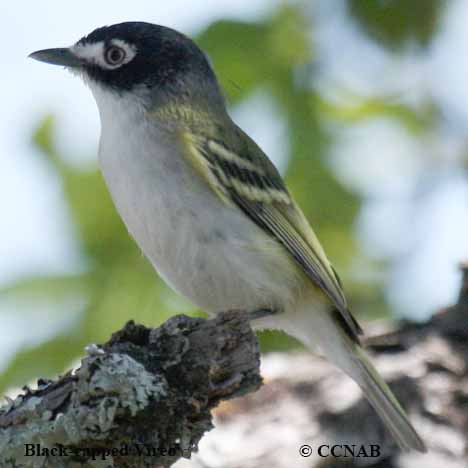 Distribution: The Black-capped Vireo is restricted to a small area in North America. There is a small population in Oklahoma and the largest numbers are found in central regions of Texas. These vireos also have a breeding range in Mexico. They spend their winters along Mexico's Pacific coast.