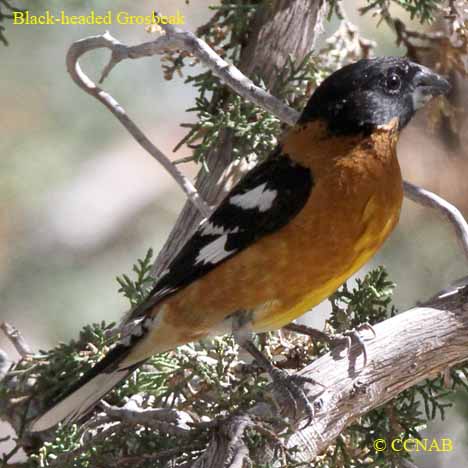 Species: The Black-headed Grosbeak (Pheucticus melanocephalus), is an attractive large billed forest dwelling bird, similar in appearance to the Rose-breasted Grosbeak. They sometimes hybridize with each other in the central regions of the continent, where both species overlap. Found in the western regions of Canada and into the western and west central regions of the USA, right into Mexico. This grosbeak is a regular visitor to bird feeders and prefers a variation of seeds and fruit.

Distinctions: Sexually dimorphic, whereas, the male in breeding plumage is seen with a black head, back, tail and wings, brownish-orange around nape, breast and flanks. The female is more so seen in a lighter brown plumage with an orange tone. Both sexes have white wing bars, seen with yellow underwing linings when flying.

Voice: Loud flute-like warbling lyrics, usually singing from high up in the crown of the tree tops.

Nesting: Three to four greenish eggs, with brown spots. Builds its nest in deciduous forest and forest edges. The Black-headed Grosbeak has one brood per year. 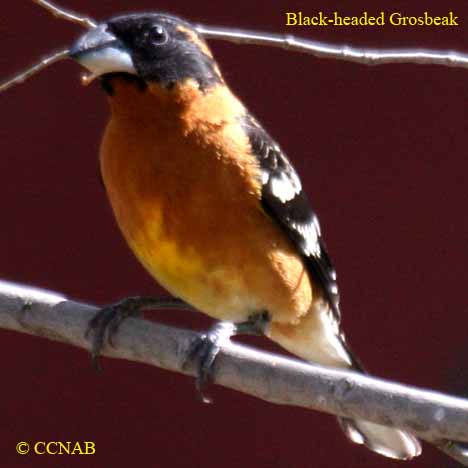 Distribution: Seen in the breeding season, from northern British Columbia and along the southern Canadian borders to Saskatchewan, down through the central USA states into Mexico, west to California and back up north into Canada along the western coastlines.