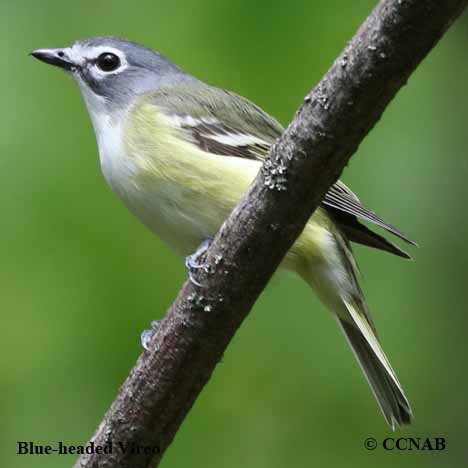 Species: The Blue-headed Vireo (Vireo solitarius), once known as the Solitary Vireo, arrives on the nesting grounds earlier and departs the northern range of its migration later than all other North American vireos in the fall. It is similar in appearance to the Cassin's and Plumbeous Vireos, who were all considered one species and split a short time ago. Like other vireo species, its' main diet is insects and it may eat fruit and seeds in some winter months.

Distinctions: The male and female are similar looking in appearance. It has a large bill with a visible hook at end of upper bill, same identifying features seen in other vireos. Blue-gray head, white lores and white spectacle surrounding the eyes as well as a green back and tail, two yellow wing bars, yellow-tipped primary feathers. Also has a white breast and undertail and yellow flanks.

Voice: Similar song to Red-eyed Vireo, multiple notes, harsher call, does mimic other vireos. Sings as it moves about through the mid and top sections of conifer and deciduous trees.

Nesting: Three to five white eggs, speckled with brown or black spots. Suspended cup like nest, built in the fork of branches. The nest is composed of strips of wood bark, plant fibres and other fine materials. 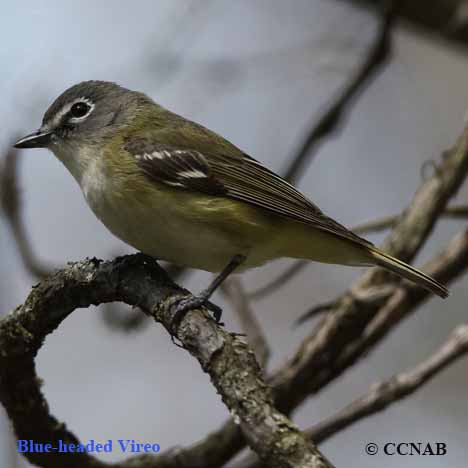 Distribution: It is found throughout Canada, from western Newfoundland through northern Ontario, across the prairie provinces and touching British Columbia. Staying inside the Canadian boundaries around the Great Lakes and along the eastern/southern Atlantic states. It winters along the eastern southern states west to Texas and into Mexico.