Species: The Blue Grosbeak (Passerina caerulea) has similar colours to the Indigo Bunting although it is a bigger bird with a larger body and bill. The blue plumage may appear black in direct sunlight. This grosbeak can be seen in thickets along roads, feeds on plants in fields and is a seed eater.

Distinctions: Sexually dimorphic, the male has a mostly dark blue body, black areas around the bill, eyes and lores, rusty epaulettes and wing bars and has a large bill. It has a blue back with dark streaking. Female is light brown, brown back with light streaking, light brown wing bars. The juvenile is similar to female, some blue colouring seen in wings and undertail.

Voice: Call notes can be soft warbling in nature or metallic. Usually, stays unseen in thickets but will perch up on an open branch when singing. 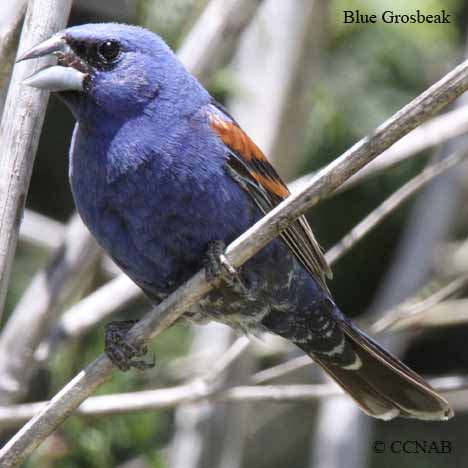 Distribution: Found in fields and weedy areas, prefers to be close to water. Resides in thickets and riparian landscapes. Seen along the eastern coast, north to New York and are reported even more north, from time to time. Going west, as far as California and back through Texas to the southern tip of Florida.