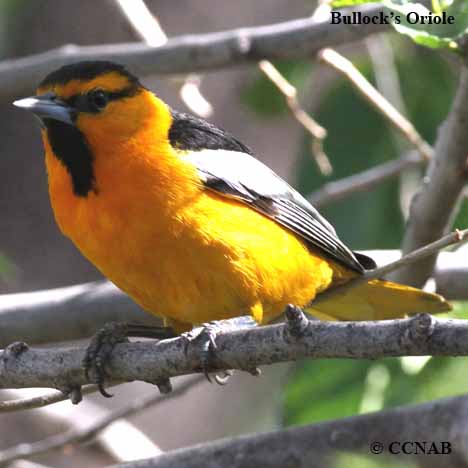 Species: The Bullock's Oriole (Icterus bullockii) is the second sub-species member of the Northern Oriole. It is found in the central USA northern states and up into southwestern Canada. Similar to other orioles, the Bullock's Oriole weaves its nest into the shape of hanging baskets. These birds are attracted to birdfeeders that entice them with fruits, jellies and nectar-type juices.

Distinctions: Sexually dimorphic, the male has a black crown and eyeline, black wings and tail feathers, large area of white coverts on wings, strong orange supercilium, back and body. The female has a light orange body, yellowish supercilium and whitish flanks and underbody, some white wing edging and black wings. Juveniles appear more like the females with maybe slightly brown coloured wings.

Voice: Musical whistles, some similarity to the Northern Oriole.

Nesting: Four to five whitish to whitish-grey eggs, with squiggles of brown and black lines. Nest built from grass, plant fibre, tree bark and string, woven into the shape of a basket and attached to branches high up in the crown of trees. 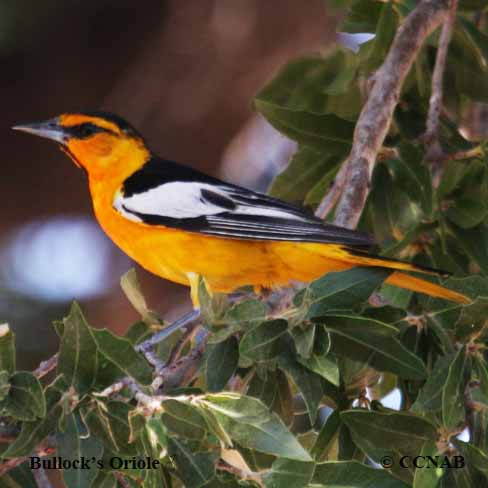 Distribution: It is commonly found throughout wooded areas with mature trees and usually near water. It is an attractive bird that visits backyard birdfeeders. It is seen in North Dakota to southern British Columbia, down into California and across to Texas and into Mexico. It migrates into Central and South America in the non-breeding season.