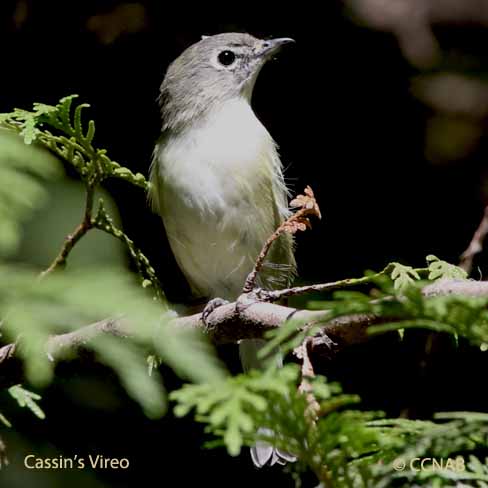 Species: The Cassin's Vireo (Vireo cassinii) came about after the Solitary Vireo was divided into three different vireo species, these being the Blue-Headed Vireo, Cassin's Vireo and Plumbeous Vireo. All three vireos are seen and recognized in different areas of North America. At different times of the year, migration periods and on winter grounds, these vireos may mix with one another. The Cassin's Vireo can be found in conifer and deciduous forests, parks and woodlands. It behaves in the same manner as the Blue-headed Vireo and can be observed moving deliberately through the branches, in search of insects.

Distinctions: The male and female are very similar looking in appearance. It has a large bill with a visible hook at end of upper bill with the same identifying features seen in other vireos. Dull gray crown, body and tail feathers, bold white lores and spectacles, two wing bars, green edges of tertials and primaries, greenish flanks and undertail, white throat and breast. 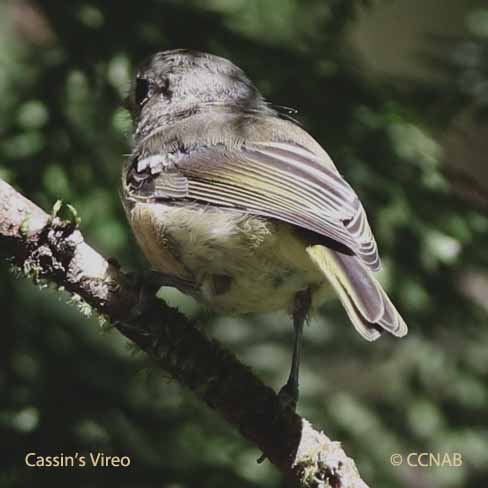 Distribution: The Cassin's Vireo is mostly seen along the western coast provinces and states. It can be found from northern British Columbia and Alberta to the tip of the California Baja, eastward into Arizona and deep into southern Mexico.