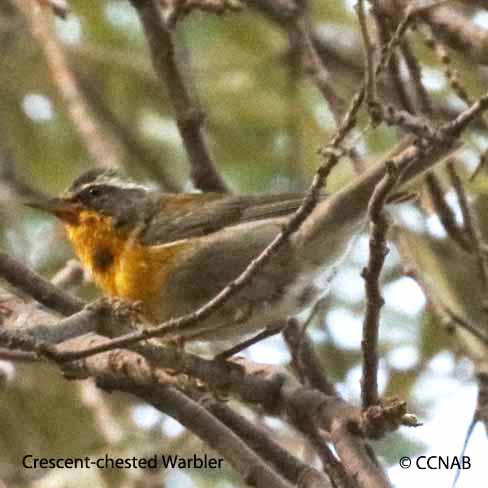 Species: The Crescent-chested Warbler (Dendroica castanea) can be found in the mountains of Mexico and Central America. It has some colour similarities to the Northern Parula and the Tropical Parula. It is seen mostly on the slopes of the mountains and it prefers a deciduous forest. Its population appears to be stable, and it associates with other passerines in flocks during the winter months, to forage for food. It is not endangered.

Distinctions: Both male and the female have bold white superciliums. The male has a gray crown, nape and tail, grayish black wings with no wingbars. Olive green back, bright yellow throat, breast and flanks, white lower body and undertail coverts. crescent at the base of its eye and the bottom side of its lower mandible is yellow. Female and juvenile have the same appearance but in duller colours.

Nesting: Three to five white coloured eggs. Builds its nest in trees. The nest is composed of leaves, twigs, moss and it is lined with fine grasses and hair. 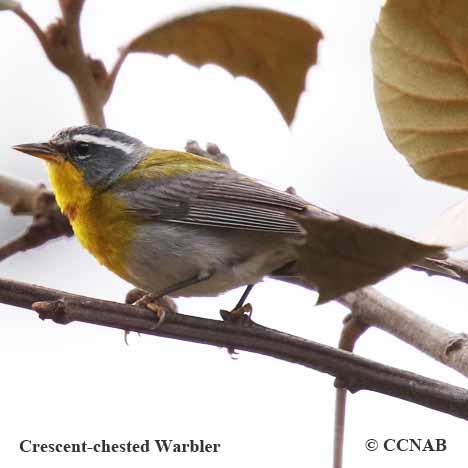 Distribution: Found along the eastern and western mountain slopes in northern Mexico, into Central America. The range map indicates this warbler keeps the same territory 12 months of the year. It is not reported in the Yucatan Peninsula regions. On just a few occasions, it has been identified in Arizona and recognized as a vagrant and a rare visitor. It has been reported seen but not confirmed in Texas, north of the Rio Grand River.