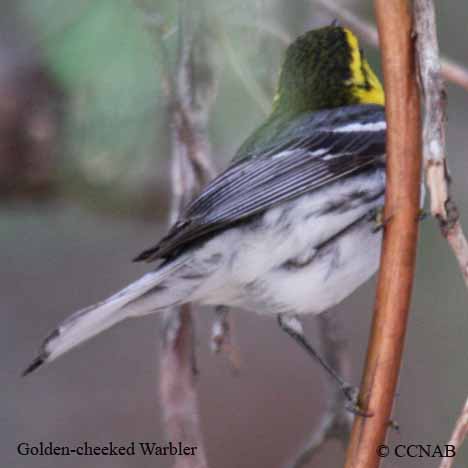 Species: The Golden-cheeked Warbler (Setophaga chrysoparia) breeding territory is endemic only to Texas and it is listed as endangered since the 1990s. As in most cases, the reason for this is the loss of habitat through agriculture and development expansions. It prefers a habitat of junipers and oaks and can be observed snatching flies from the air, just above the crowns of the trees. This attractive yellow and black warbler can be mistaken for the Black-throated Green Warbler as both bird species have an apparent yellow face, except the Golden-cheeked Warbler has a black eyeline.

Distinctions: The male has a bright yellow face showing a dark eyeline. Black crown, nape, back, tail and wings, showing two white wingbars. Bold black streaking on its flanks, white breast and undertail coverts. The female has similar appearance, except with duller colours, yellowish-green crown, showing more white all around. The juvenile is similar to female but showing more of an olive-green on its upper body.

Nesting: Three to five creamy white coloured eggs, with brown markings. The nest is built up in the mid-range of a tall juniper. It is composed of rootlets, spiderwebs and is lined with fine grasses. 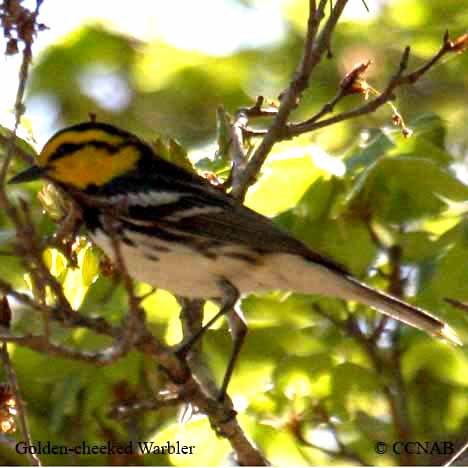 Distribution: Found only in central Texas from March until late June or early July. Found mostly in park reserves and military bases where mature trees are available. Spends its winter months in southern Mexico and in the northern countries of Central America.