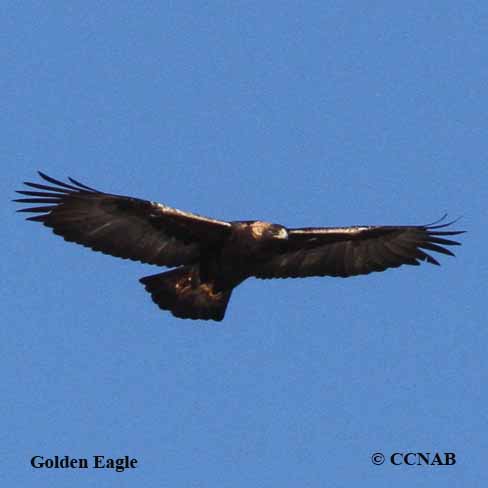 Species: The Golden Eagle (Aquila chrysaetos) is one of the two native eagles in North America, the Bald Eagle (Haliaeetus leucocephalus) is the second one. This large dark brown bird of prey is more common in the western regions of the North American continent and is found mostly in mountainous terrains. It preys upon marmots, rabbits, grouse and ptarmigans. It has been known to prey on young Bighorn Sheep and young Mountain Goats. Snatching them from their parent off the sides of the mountains.

Distinctions: Adults are similar in appearance, the female being the larger of the two. Both are mostly dark brown, both mature sexes have orangish coloured feathers on the back of their crowns, shoulders and the leading edges of their wings, orange legs and feet. Legs are feathered to the toes. Adults have band(s) on their tails, the males have more noticeable bands. It takes four years for a Golden Eagle to reach its mature plumage. The juvenile has a white tail with a large brown terminal band, large white areas on the underwings, located at the base of the secondaries.

Voice: More vocal when around their nest. Loud cries sounding like "kiya".

Nesting: Two to three white or buffy-white eggs, one brood per year or every other year. Nest built on sides of cliffs or mountain slopes, at other times in tall mature trees, high above the ground. Built from branches, sticks, twigs, leaves and softer materials, may reuse nest in following years. 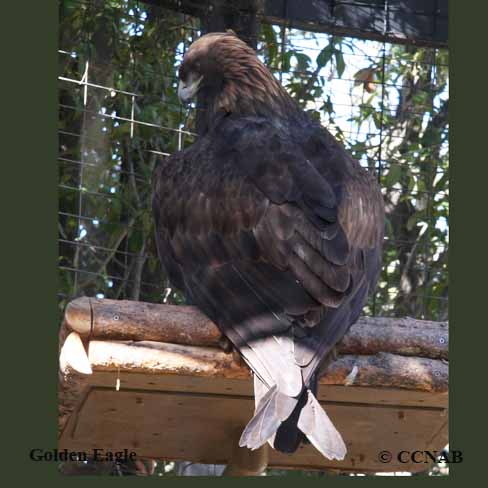 Distribution: Found throughout the northern hemisphere around the globe. Larger population found in the western regions of North America. Although the Golden Eagle is becoming a more common sight in eastern North America. An eastern population forming in the northern areas of Quebec and Ontario. Found from Saskatchewan into northern Alaska, south to southern California, east to eastern Texas and up through the midwest states. A couple of small pockets found in the mid-eastern states, where the eagle spend their winter months.