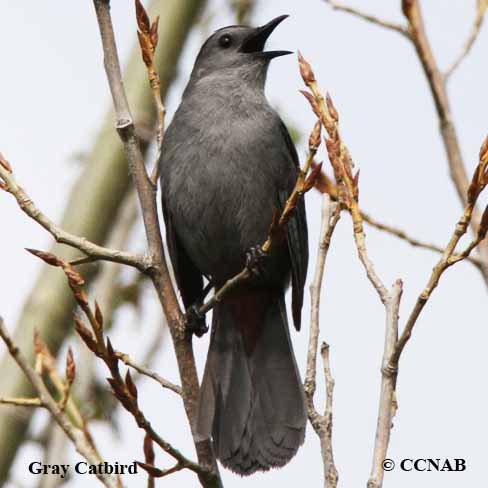 Species: The Gray Catbird (Dumetella carolinensis) is part of the same group of mimic birds such as thrashers and mockingbirds. It is known for its wide variety of songs, including its "mew" call. This bird is found around residential properties where it is quite comfortable among people, and most times, easy to approach.

Distinctions: The male and the female are similar in appearance. Both sexes have an all grey body, black crown and a chestnut coloured patch in the undertail coverts. When one is seeking a singing bird, it is typical for the bird to move deeper into the thickets, but with some patience, the catbird can be coaxed back out into an opening. It is not uncommon to see the Gray Catbird perched on a limb, warming itself in the sun with its body squat and flattened and feathers ruffled.

Voice: It has a large repertoire, from flute-like notes to scratchy notes, with the odd "mew" thrown in and mimicking a sound which it may have heard.

Nesting: Four to five blueish-green coloured eggs, as many as two broods per year. Builds its nest in thick bush or tangles, usually in a small tree located a few feet from the ground. 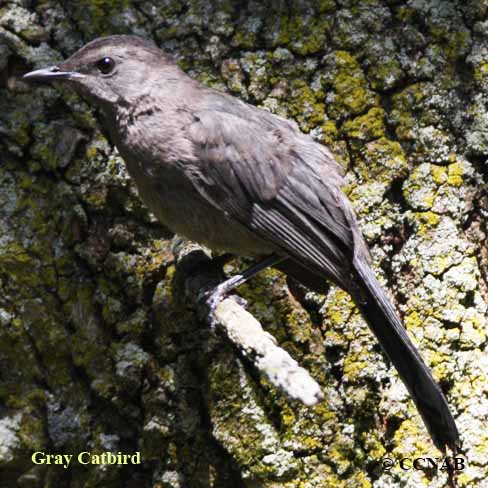 Distribution: Found throughout areas with thickets or brambles, comfortable in residential areas. Seen from Nova Scotia to British Columbia, down into New Mexico and across to Florida. May spend the winter months in southern Florida, Louisiana, eastern Texas, and into Mexico.