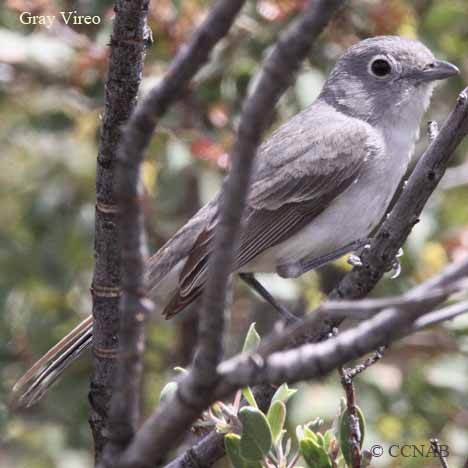 Species: The Gray Vireo (Vireo icinior) is found in a semi-arid landscape, composed of oaks, juniper and scrub brush. It is not an easy bird to observe as it stays out of sight in the overgrowth. However, it can be located by its singing. This dull gray bird has few features that one can use as identifying notes. It mainly feeds on insects and some fruit in the winter months.

Distinctions: The male and female are very similar in appearance. It has a large bill with a slight hook at the end of upper mandible, same identifying features seen in other vireos. Dull grey crown, darker grey body, wings and tail. Two wing bars, one more apparent than the other. Light grey lores, with a weak eyering as well as a greyish-white throat and breast.

Voice: Nasal sounding, similar sounds to other vireo types, multiple call notes. Sings from inside of undergrowth, more likely to be heard than seen, sings throughout the day even after the breeding season.

Nesting: Three to five white eggs, speckled with brown or black spots, two broods per year. Suspended from a fork in branches of a tree. The nest is composed of strips of wood bark, plant fibres and lined with fine grasses and spiderwebs. 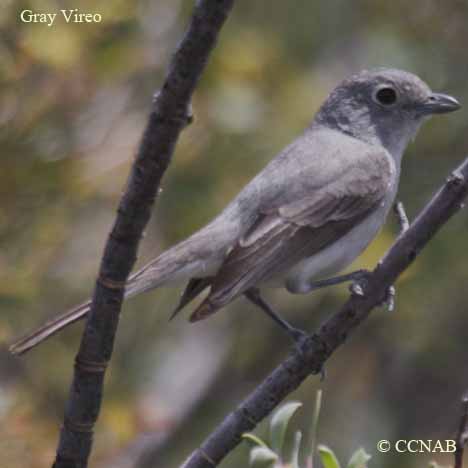 Distribution: The Gray Vireo is observed in the southwestern US states, from Colorado to California, eastward through Arizona, New Mexico and into Texas. This tough vireo is accustomed to the hot and dry climate of its habitat. It winters in southern Colorado and west Mexico.