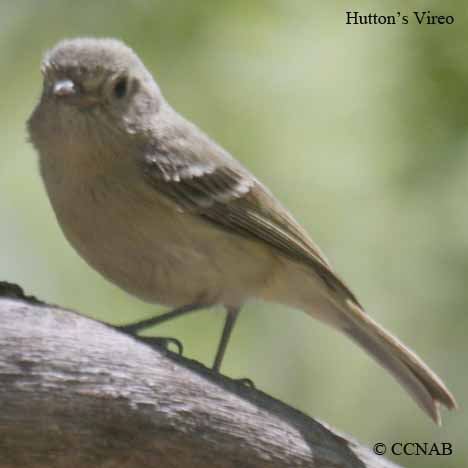 Species: The Hutton's Vireo (Vireo huttoni) is the smallest member of the vireo family seen in North America. It is often confused for the Ruby-crowned Kinglet because of its body size, profile and green plumage. Recognizing the larger bill on the vireo separates the two. It prefers mixed conifers and oaks for its habitat. The vireo's main diet is insects and it does not migrate in the winter months.

Distinctions: The male and female are very similar looking in appearance and the female may have duller plumage. It has a large bill with a visible hook at end of upper bill, same identifying features seen in other vireos. Depending on what race it is, it can have a greenish to gray head and back. It also has a grayish-white throat and breast. Slight eyering, broken dull lores, dusky flanks, two wing bars.

Nesting: Three to five white eggs, speckled with brown or black spots. Suspended from a fork in branches of scrub oak or in underbrush. The nest is composed of strips of wood bark, plant fibres and lined with fine grasses and spiderwebs. 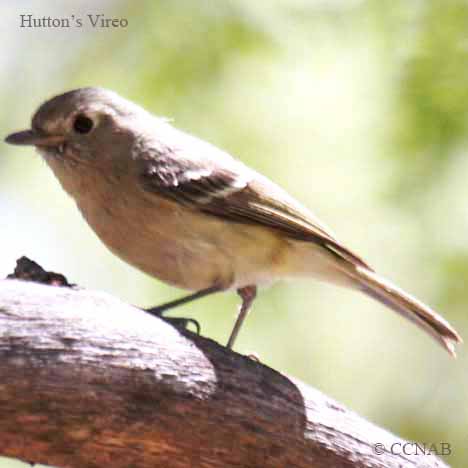 Distribution: The Hutton's Vireo is found along the Pacific coast of the US and Canada. It is seen on Vancouver Island and thoughout the southern coastal states into California. It can be found in southern Arizona, New Mexico, Texas and Mexico. The Hutton's Vireo does not migrate.