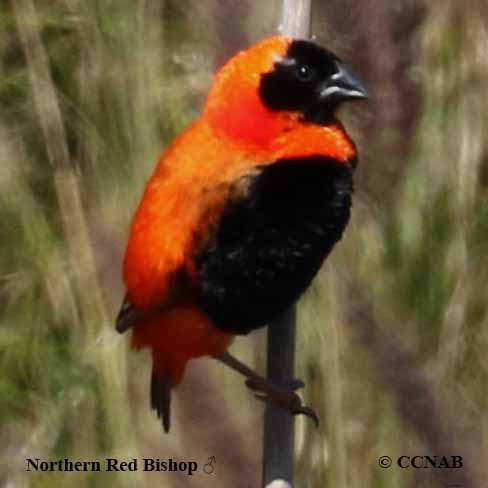 Life, Habitat and Pictures of the Northern Red Bishop

Species: The Northern Red Bishop was once known as the Orange Bishop (Euplectes franciscanus). It is an exotic bird that is native to northern Africa and is a member of the weaver family. This bird species has been reported in Miami, Houston, Phoenix and Los Angeles. In most cases, these are escaped bird sightings. There is a breeding colony in Houston, Texas.

Distinctions: Sexually dimorphic, the male has a reddish orange body, black face and crown, black breast and brown wings and tail tip. The female is sparrow-like in appearance, light brown overall, with slightly streaked breast, juvenile similar to the female and the male, when the male is in non-breeding plumage.

Nesting: Four to five aqua blue eggs per clutch. Nest is constructed on to a group of stronger plant stems, woven into a hive-like enclosure, using grass and hay-like materials. Male may have multiple female mates at the same time.

Distribution: Seen in the southern states, where the temperatures are somewhat similar to their native homes. Reported across the southern states, mostly likely escaped birds. There is a breeding colony located in the city of Houston, Texas and another one in Phoenix, Arizona.