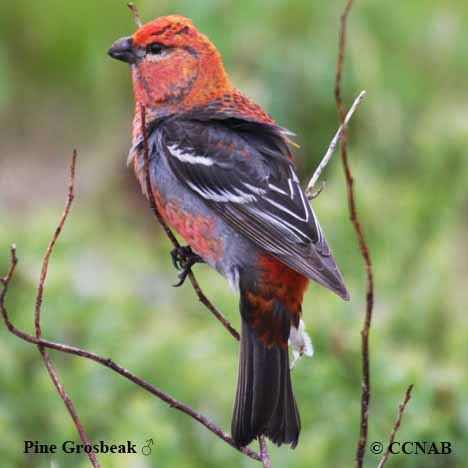 Species: The Pine Grosbeak (Pinicola enucleator) is the largest member of the grosbeak family in North America. Being circumpolar, this grosbeak can be seen throughout Eurasia's northern range. They are tame and trusting in nature and are very easy to approach. The conifer forests are the mainstay of their habitat. This is where these large finch-type birds feed on the fruit and berries from the trees, including cone seeds.

Distinctions: The male has a reddish wine coloured body, including head, back and breast, with dark wings with two white wingbars, and a black tail. The female is mostly grey in nature, yellowish crown and nape, dark wings, with two wingbars and a dark tail as well. The juvenile is similar to the female but with duller colours.

Voice: Whistle-type lyrics, combined by using four or five notes. Common to be seen singing from the top of a conifer tree.

Nesting: Three to five pale bluish-green coloured eggs, one brood per year. The nest is built in a tree, not too high from the ground. Made up of forest materials, such as twigs, needles and leaves. 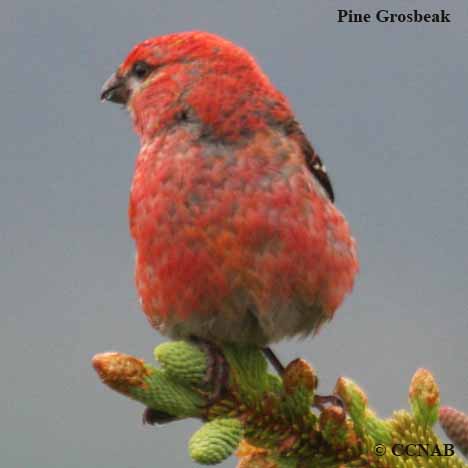 Distribution: Prefers a cooler climate, which includes mountainous terrains. In the winter months, it may move into deciduous growths in search of seeds and buds. Seen from Newfoundland and Labrador throughout all the provinces, especially the northern region provinces, Northwest Territories, Yukon Territory and Alaska. It may also be seen in the Rocky Mountain range and other isolated pockets in the northwestern US states.