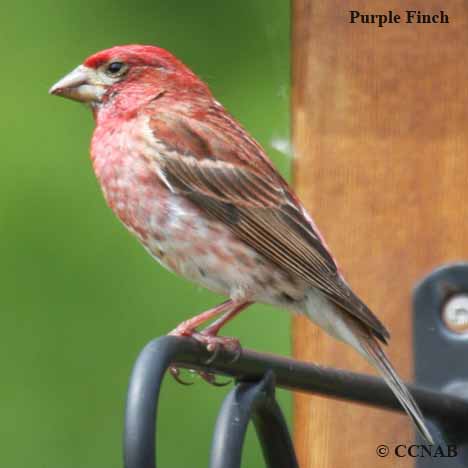 Species: The Purple Finch (Haemorhous purpureus) is not purple, but a rosy or raspberry red colour, especially around the head, breast and back. This common bird is found throughout Canada and large areas of the USA. Seen in coniferous or coniferous/deciduous and forest edges in the breeding season. It is a common bird around birdfeeders in the winter months, keeping company with other species of finches, such as the American Goldfinch, Redpolls and Pine Siskin.

Distinctions: Sexually dimorphic, the male has a bright red plumage, including the head, back, upper breast, flanks and rump. Also, having a large bill and brown stripes on its back. The female's plumage is brown and olive green with steaking down the back also, and heavy streaking on its breast. The juvenile is similar to the female.

Nesting: Four to five bluish-green eggs with brown and black markings, one to two broods per year. Nest built in a tree, composed of strips of bark, branches, twigs, grasses and moss. 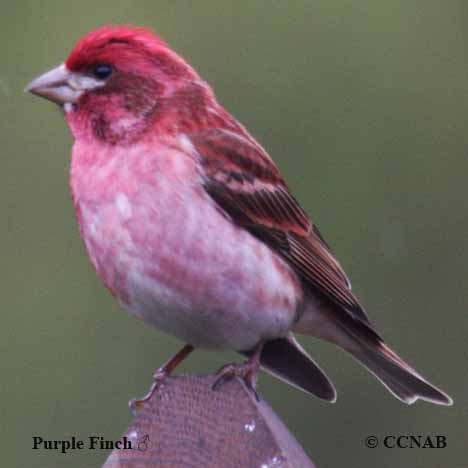 Life, Habitat and Pictures of the Purple Finch

Distribution: Commonly seen throughout Canada and large areas of the USA. There is a concern of a declining population in the northeastern portions of the USA. Found from Newfoundland and Labrador, across Eastern Canada through the prairies, into the Territories to the southern end of the Yukon Territory, south along the Pacific coast to southern California. East-central USA, south into Texas and east to Florida.