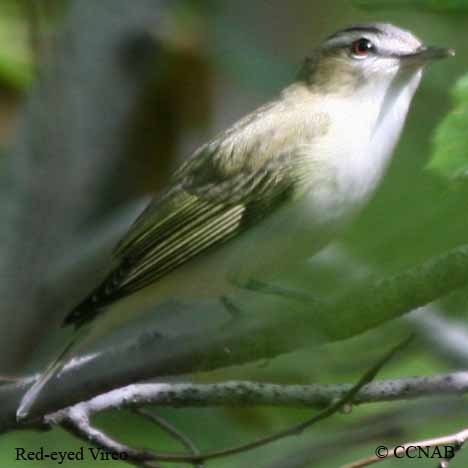 Species: The Red-eyed Vireo (Vireo olivaceus) is the most common and has the widest range among vireo species seen in North America. It is known for its constant singing especially when on its breeding territory and throughout the summer. It is one of the larger vireo species seen on the continent. It is usually seen in the crown of deciduous trees, moving about gleaning insects from the leaves and branches. In the winter months, it will feed on seeds and fruit.

Distinctions: The male and female are similar looking in appearance. It has a large bill with a visible hook at the end of it. Recognized by its bluish gray crown, black line at base of crown, white eyebrows, dull yellowish cheeks and nape, dull yellow showing along flanks and undertail. Adults have a white breast and juveniles may have larger areas of yellow along their flanks. Their backs are green and no wing bars are visible. Red eyes are more easily seen at close range and in good light.

Voice: Deliberate call notes, repeated over and over throughout the day, consists of an array of musical notes similar to the robin.

Nesting: Three to five white eggs, speckled with brown or black spots. Suspended from a crotch on a branch high up in a mature tree. The nest is composed of strips of wood bark, plant fibres and other fine materials.

Distribution: It is found throughout North America, from the western side of Newfoundland, as far north as James Bay, bordering Ontario and Quebec. Parts of the western Northwest Territories to the western coast of British Columbia, south into Oregon and through the northern regions of the midwestern states, down into Texas and over into Florida and up into Canada.