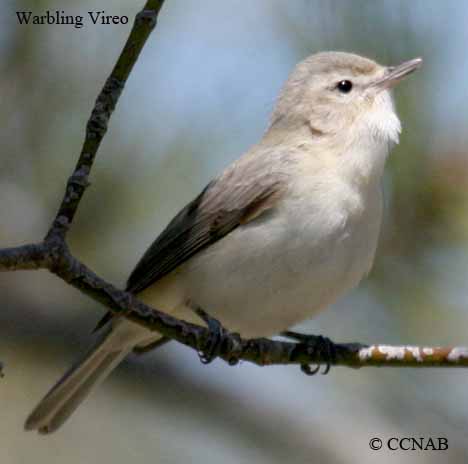 Species: The Warbling Vireo (Vireo gilvus) along with the Red-eyed Vireo are the most common vireos seen in North America. It is recognized by its warbling melody, heard from up high, in mostly deciduous trees. It is heard more often than seen. It is similar in appearance to the Philadelphia Vireo that has all the same features but shows more yellow on its breast and flanks. Similar to all the other vireo species, its main diet is insects,.

Distinctions: The male and female are similar looking in appearance. It has a large bill with a visible hook at the end of the upper bill, same identifying features seen in other vireos. It is very plain in appearance, soft dull green or light brown body with a white breast, resembles warbler-type birds, but has a stockier build. Soft green to light brown plumage, white eye browlines, no wing bars and slightly yellow-coloured flanks.

Voice: Warbling melody, easily recognized, sings from high up in mature deciduous trees and is heard more often than seen.

Nesting: Three to five white eggs, speckled with brown or black spots. Suspended from a crotch on a branch high up in a mature tree, very similar to the Red-eyed Vireo's eggs. The nest is composed of strips of wood bark, plant fibres and other fine materials.

Distribution: Found throughout North America, from eastern New Brunswick, west into the Great Lakes, into the northern Northwest and Yukon Territories, south into southern California, east to North Carolina coast and up into Canada. Migrates into Central and South Americas during the late fall and winter months.