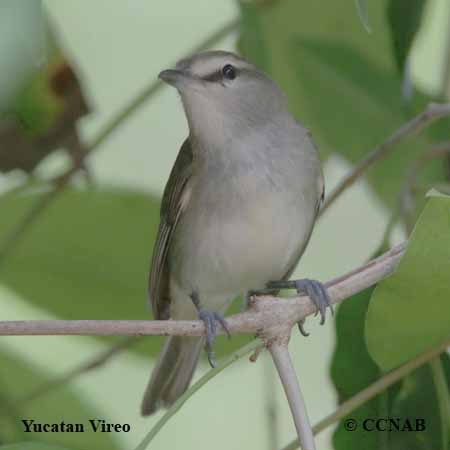 Species: The Yucatan Vireo (Vireo magister) is a tropical vireo seen in southern extremes of Mexico, Central America and on some Caribbean islands. It is similar in size to the Red-eyed Vireo and prefers living close to coastlines and is common in Belize and a few islands in the Caribbean Sea. It was recorded seen once in Texas and was accepted as a vagrant

Distinctions: The male and female are very similar looking in appearance. It has a large bill with a visible hook at the end of the upper bill, same identifying features seen in other vireos. It is similar in size to the Red-eyed Vireo but has a larger bill. Greyish crown and body, white supercilium and face, has a dark line through the eyes, white throat, breast and undertail, brownish-grey flanks.

Voice: Nasal sounding, similar sounds to other vireo types, multiple call notes. Prefers staying high in trees when singing and in its search for insects, calls throughout the day.

Distribution: The Yucatan Vireo is a resident bird of Belize and surrounding countries. It is only seen on the Caribbean side of the continent. It is common on some of the Caribbean islands and does not seem threatened. It was reported seen once in Texas and is recognized as a vagrant to North America.