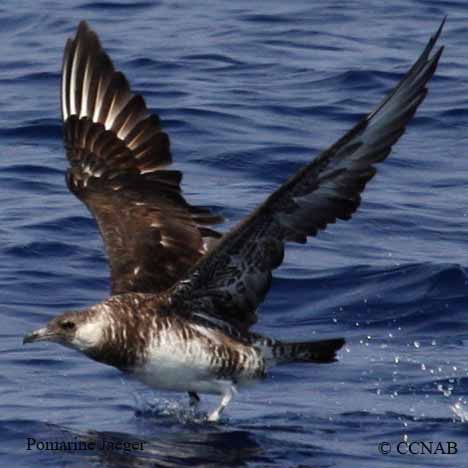 The jaegers are predators and feed on mice and lemmings found in the tundra. One of their tactics is chasing and harassing gulls, terns, kittiwakes and other smaller birds to give up their food. These birds are easily recognized by their dark brown plumage and the large white area seen on their outer primaries. This being said, the Pomarine Jaeger and the Parasitic Jaeger have many similarities. Given a clear view, one can examine the size and build of the bird, its bill size and length. The Pomarine Jaeger is larger in size and has a heavier bill. The Parasitic Jaeger can be more easily recognized by its noticeably longer tail feathers when sitting on water.

Tail Profiles of the Jaegers