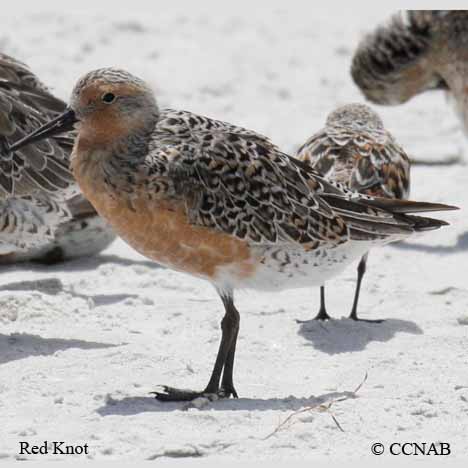 The Red Knot is the only native knot found in North America. The Great Knot is a bit larger than the Red Knot and is a native bird of Asia.

These two shorebirds are in declining numbers. The Red Knot because of loss of feeding areas along the Atlantic coastlines. Crab harvesting has lead to a shortage of crab eggs which are the main source of the bird's diet. The Red Knots depend on these crab eggs to restore and build fat for their long fall migrations into the southern hemispheres. The Great Knot is suffering from over hunting in the North Asian countries along the northern Pacific coastlines.

The knots are sturdy looking birds with mid-length thick bills and strong legs. Both species nest in the northern regions of their native continent.