The Sibley Guide to Birds 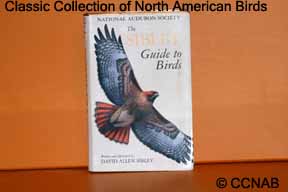 The Sibley Guide to Birds
By David Allen Sibley

An excerpt from the Introduction;

This book covers the identification of 810 species (plus 350 regional forms) found in the continent of North America, north of Mexico, including the United States and Canada, and adjacent islands, but excluding Hawaii, Bermuda, and Greenland. Offshore waters are included to a distance of 200 miles (320 km) or halfway to the nearest land that is not a part of the North American region, whichever is closer. These boundaries conform to the American Birding Association's established definition of the North America region.

I have included that species and identifiable population that occurs regularly within this area, including most rare but regularly visitors. Rare burt regularly visitors included in this book, are defined loosely as those species recorded 10 or more times in the last 25 years, but some arbitrary decisions were made to include a few less frequently recorded species or to exclude a few that are seen more frequently. Some species that occur regularly only in western Alaska, and nowhere else in North America, are excluded. Established introduced species such as the Rock Dove and Chukar are included, are as frequently seen exotic species. Escaped exotic species include many waterfowl, upland game birds, parrots, mynas, and finches; some of these have established small feral populations.

Return The Sibley Guide to Birds back to Bird Books