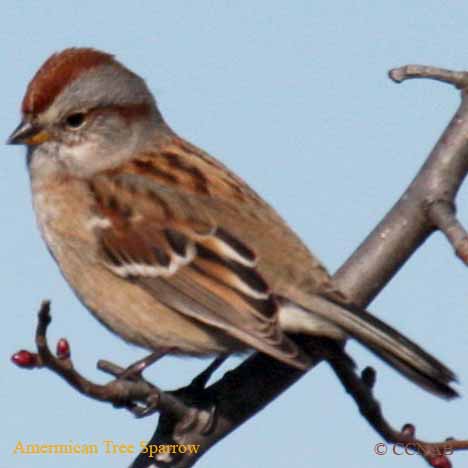 Distribution: The American Tree Sparrow nests in the tundra and is one of the most northern sparrows. It is identified by its rufous cap, yellow bi-coloured lower mandible and an upper dark mandible. It also has a single dark spot located on the center of its clear breast. The sparrows may spend their winter in Canada and are the most likely sparrows to be seen at birdfeeders in the colder months. Depending on the time of the year, the American Tree Sparrow can be seen in two different areas of North America. In nesting season the sparrow is seen in the northern boundaries of Quebec, Ontario, northern Manitoba, across Nunavut and the Northwest and Yukon Territories. It is also seen throughout Alaska and northern British Columbia. During the winter months, it will most likely be in the northern states but no further south than Oklahoma or northern Texas.