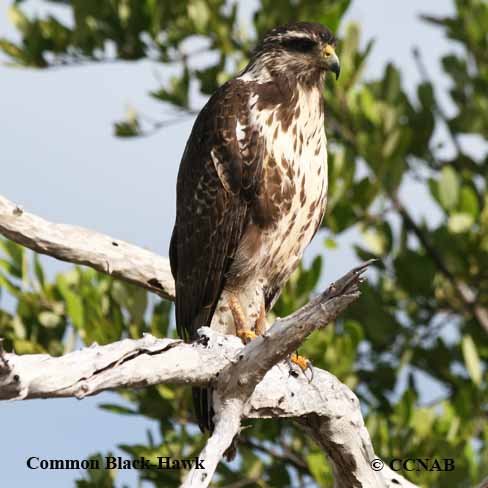 Species: The Common Black-Hawk (Buteogallus anthracinus) is found in southwestern areas of the USA. This bird of prey, a member of the buteo family, can be mistaken for the Zone-tailed Hawk, which is another all-black hawk that is seen in their shared regions. These hawks prefer to feed on reptiles, crustaceans and fish. It is typical to see these hawks perched on a limb in a tree, rather than soaring in search of prey. At this time, the Black-Hawk seen in Cuba is considered a sub-species to the Common Black-Hawk seen on the continent.

Distinctions: The male and female are similar in appearance, the female being the larger of the two. Adults are all black, yellow feet and ceres. Wide wings, giving the impression of a wide short tail. They have one large white tail band with small white outer tip. The juvenile, unlike the parent, has a brown body, heavy streaking on the head, flanks and breast. The tail has many small wavy bands.

Voice: As in other birds of prey, loud rapid cries. May make calls from a perch or when it is in the air.

Nesting: One to three white eggs, with brown markings. Large nest is built high in a mature tree, made from branches and sticks, usually located near water. 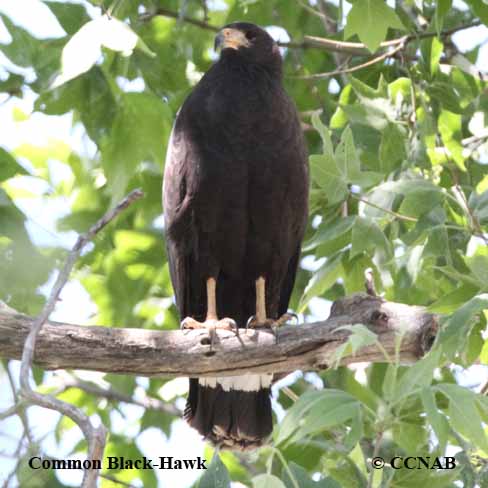 Distribution: Bird seen in the USA and migrates into the south in the winter months. The Common Black-Hawk seen in Mexico and Central America may or may not migrate. There is an established population in Arizona, where it is most likely to be seen. There is also a possibility of seeing these hawks in New Mexico and Texas.