Species: The Cooper's Hawk (Accipiter cooperii), once known as the "Chicken Hawk", is a mid-sized hawk in the accipiter family; the Sharp-chinned Hawk being the smallest hawk and the Goshawk being the largest. The accipiters prey mostly on other birds and small animals. It is a common hawk seen hunting pigeons in cities and around bird feeders preying on doves.

Distinctions: The male and female are very similar in appearance. As with most birds of prey, the female is noticeably the larger of the two sexes. Both adults have a blue to bluish-grey back, wings and tail. The tail itself is long with bold bands. The breast is light in colour, fully covered with orange barring. A noticeable distinction is their red to reddish-orange eyes. The juveniles are different from the adults in their first year, seen as brown birds with a hint of rufous, bold banned tail feathers and bold brown breast streaks. The Sharp-chinned Hawk is almost exactly the same in appearance, where the female is almost the same size as the male of the Cooper's Hawk. The difference comes down to the rounded tail feathers of the Cooper's Hawk and to the square tail feathers of the Sharp-chinned Hawk. Another feature is a longer neck and head projection when these two bird species are seen in flight. A flatter crown on the Cooper's than compared to a rounded crown on the Sharp-chinned.

Nesting: Three to four pale white eggs, with possible brown speckles. Nest usually built high in a deciduous tree. Prefers an open wooded area and can be found in parks and even woodlots. 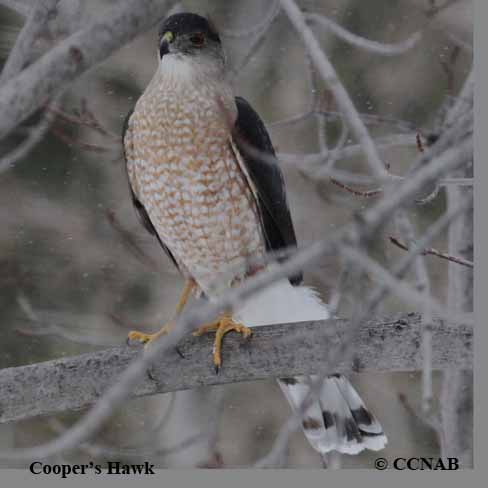 Distribution: Found throughout wooded areas and parks. It has adapted well to towns and cities and is a common backyard visitor, where bird feeders are located. It can be seen flying over areas with rapid wing beats and short gliding patterns. Common throughout North America, seen from eastern Canada to British Columbia, down into California and east to Florida.