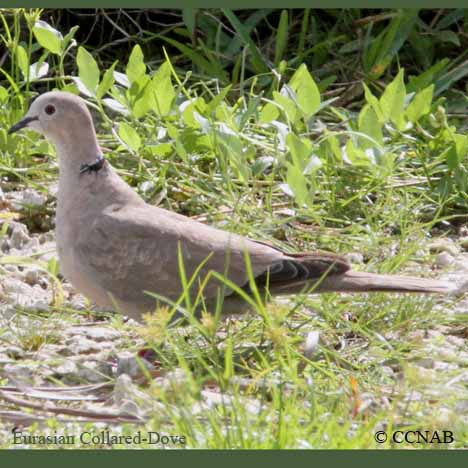 Species: The Eurasian Collared-Dove (Streptopelia decaocto) is a fairly new bird species that has been recognized as breeding in North America. It is thought that this bird originated in southern Asia, where over time it has expanded into Western Europe and become a common sight throughout all the countries. Its entry into North America is said to be through the Bahamas, where breeding colonies developed and from there into Florida. These doves do not show tendencies to migrate, but instead they expand, branching farther north and west every year. At this time there have been reports of this dove being seen even in the state of Alaska and sighted every year in eastern Canada.

Distinctions: Adults are similar in appearance, larger in size than a Mourning Dove (Zenaida macroura). Soft gray in colour, light brownish tone back, semi-black collar encompassing the nape. Dark primaries, mid areas of upper wings are grey, including the secondaries. Black areas showing at the base of the tail, large white terminal band. Orange legs and feet, dark red eyes, with white orbital ring. Juveniles are similar to the parents except not as well groomed.

Nesting: Two to three white eggs, three to six broods per year, depending on food supply and weather conditions. Nest built in trees, composed from branches, sticks and feathers. Male can be seen in breeding season doing specific aerial flights, where after gaining height, with fixed wings, glide back to the ground in a circular flight pattern. 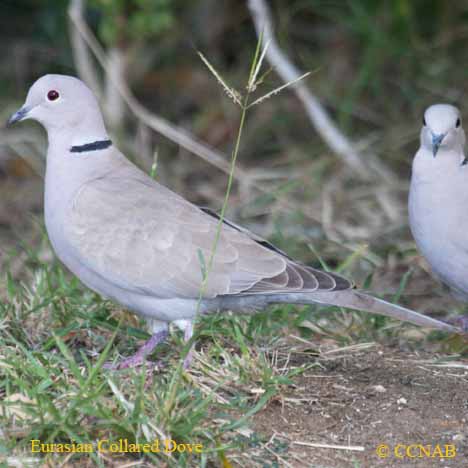 Distribution: In a matter of approx. 30 years, this dove has been sighted in southern Ontario, west across the southern portions of the prairies, to a few sightings in Alaska, to southern California, east across all the states to the tip of southern Florida, north to the US and Canadian Atlantic border. It is now being seen through all of Mexico and into Central America.

Return to Fielf and Stream Birds