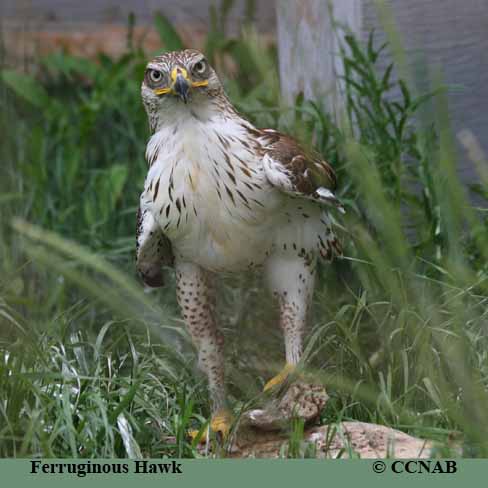 Species: The Ferruginous Hawk (Buteo regalis) is the largest member of the buteo family in North America. This large bird of prey prefers open habitat such as prairies and sparsely treed grasslands. The main diet is ground squirrels, prairie dogs, rabbits, snakes and large insects. It is commonly seen perched on fenceposts or in trees next to highways. When prey is spotted, it will fly up into the sky over the prey and then it will dive down upon it.

Distinctions: Adults are similar in appearance, the female being the larger of the two. According to some observers it is seen in three morphs. One being a light rufous back, white on breast and the underwings. Second morph, which has a darker rufous body, with a light rufous breast and underwings. Then the third morph being a dark brown body, whose outer wing feathers are white. These birds, like the Rough-legged Hawk, have feathered feet right to the toes. A large beak, with a large yellow gap stopping below the eye. The top of the wings have large white areas at the base of the primaries and secondaries, a white tail with very light makings. 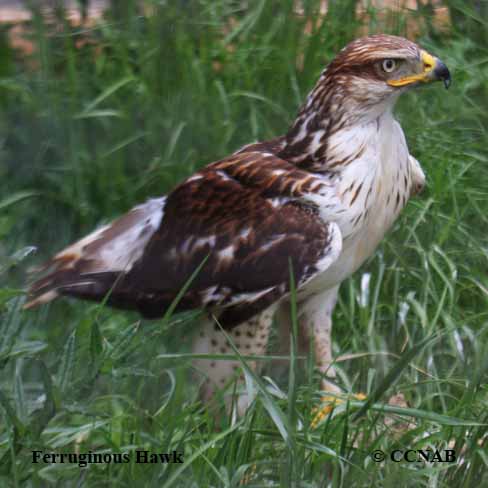 Distribution: Reports going back as far as eighty years state that this hawk is uncommon. It can be seen in southern Manitoba, west to southern Alberta and into southern Washington as well as throughout the western states. It migrates into California as far as Northern Mexico and the western half of Texas. Population numbers may reflect loss of habitat and persecution by man