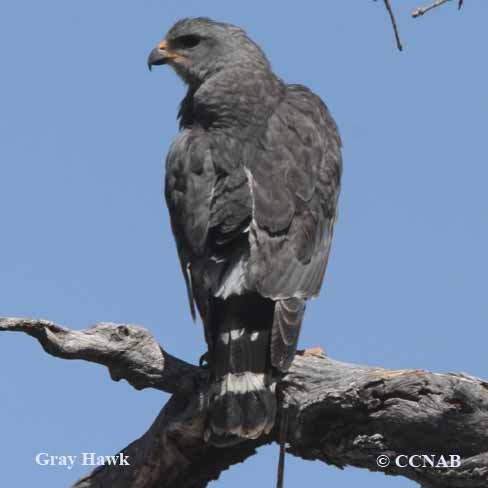 Species: The Gray Hawk (Asturina nitida) once known as the "Mexican Goshawk", because of its similar appearance to the Northern Goshawk, seen in North America. Today, some consider it to be a member of the buteo family, having wide rounded wing and a stocky build. It can be seen perched on a tree limb or on a utility line or gliding over the landscape, where it hunts for any unsuspecting rodents, small mammals or reptiles that it sees on the ground below.

Distinctions: The male and female are similar, the female is the larger bird of the two. They have light grey bodies, with small barring covering the whole breast, wings have light checkering, long tails with three dark bands and offsetting four light coloured bands. The juvenile is different from the parent as it has a brown back, wings and a tail that is banded. Breast is heavily streaked, and the face is white with bold eyelines.

Voice: Call notes are rapid cries, can be heard when the bird is perched or flying.

Nesting: Two to three bluish white eggs. Nest built high in the crown of a large tree. Nest is constructed of branches, sticks and leaves. 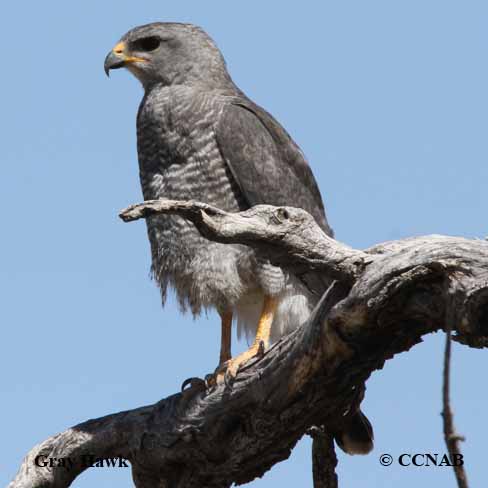 Life, Habitat and Pictures of the Gray Hawk

Distribution: Prefers an open and arid landscape, accustomed to a warmer climate. Breeds in the extreme southern Arizona regions. Can be seen in the winter months, north of the Rio Grande River in southeeastern Texas. It is a common native hawk to Mexico and Central American countries.