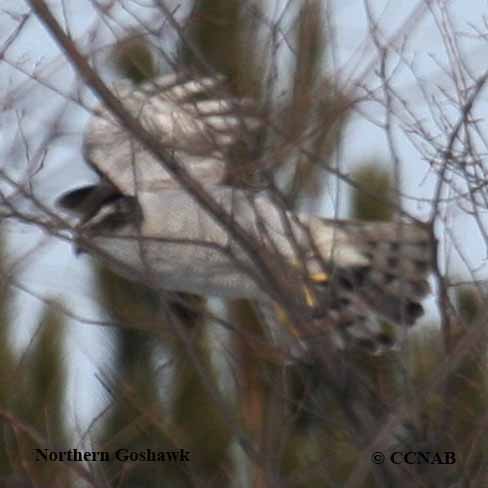 Species: The Northern Goshawk (Accipiter gentilis) is the largest member of the accipiter family seen in North America. Similar in size to buteos, feeds on larger prey, such as grouse, ducks, rabbits and maybe even geese if given the opportunity, as well as smaller birds. The female is very protective around her nest and may attack humans if one approaches too close. It can sometimes be seen soaring quite high in the sky when in the search of prey.

Distinctions: Adults are similar in appearance, the female being the larger of the two. Mature birds have bluish to slate-coloured backs, fine markings on breast, checkered wings when seen flying. Long tails with visible banding, wide wings which aids in gliding, red-coloured eyes, head has a bold supercilium. Juveniles, being of similar size to the adults, brown plumage, streaking on breast, heavier in nature when compared to a juvenile Cooper's Hawk.

Nesting: Two to three bluish off white eggs, one brood per year. Nest built in mature trees, high above the ground. Built from branches, sticks, twigs, leaves and softer materials. 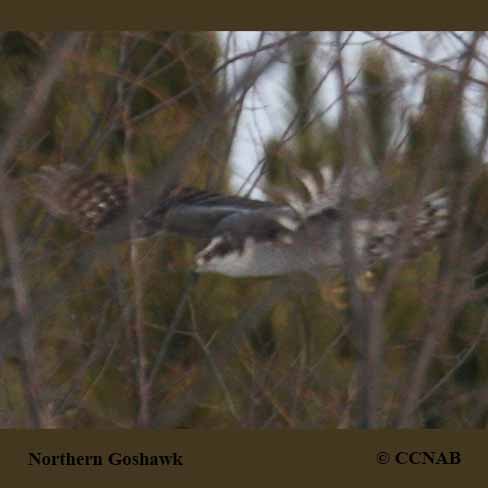 Life, Habitat and Pictures of the Northern Goshawk

Distribution: Found throughout the North American forests, from Newfoundland to Alaska, south to Mexico and east across the northern half of the US states. Prefers to nest in the northern regions, will follow prey to the southern gulfs when food becomes scarce. Although widespread, it is not considered a commonly seen hawk because of its smaller numbers and its habitat of hunting mostly in treed areas.