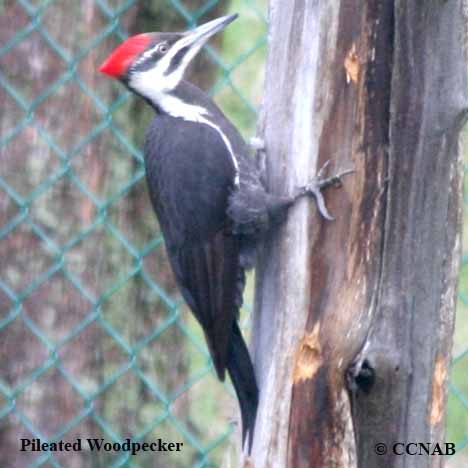 Species: The Pileated Woodpecker (Dryocopus pileatus) is the size of a crow and is the largest member of the woodpecker family seen in North America. Even today, this woodpecker is being mistaken for the extinct, Ivory-billed Woodpecker, which is similar in looks and size.

Distinctions: This large woodpecker, 16 to 17 inches in size, both sexes have large red crests, mostly black and white bodies, white stripes down their necks. The male can be distinguished from the female by its red malar (mustache) and full red crest. The female has a black malar and a partial red crest. Both sexes have large white areas in the regions of their underwing coverts and axillaries, which are visible when they are seen flying.

Voice: Loud rapid cries, something you would expect to hear in the tropics. Loud rapid tapping on a tree trunk or limb which the male does to attract a mate. 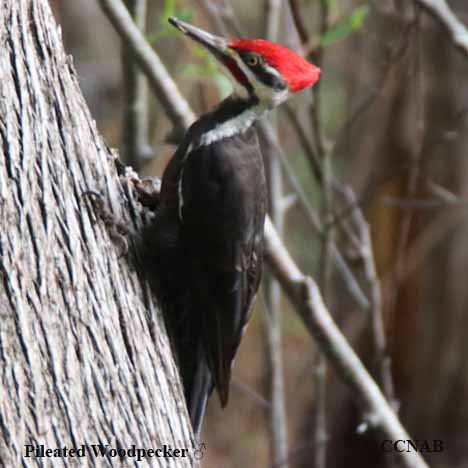 Life, Habitat and Pictures of the Pileated Woodpecker

Distribution: Non-migratory and common across North America, seen from Nova Scotia to northern British Columbia, down into California, up into the central states, down into Texas to the Atlantic coast and back up into Canada. This large woodpecker has adapted well, making a comeback from the early 1900's. The Pileated Woodpecker can even be seen in wooded areas inside towns and cities.

Return back to Woodpeckers

Return back to Forest Birds