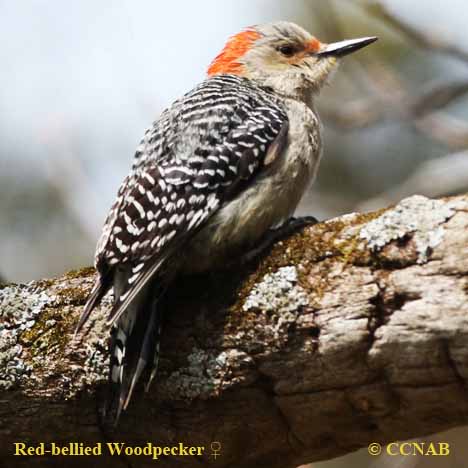 Species: The Red-bellied Woodpecker (Melanerpes carolinus) is an eastern North American bird species, whose western and northern ranges are expanding more every year. This woodpecker is becoming a more common visitor and is seen at birdfeeders in the winter months, in Canada.

Distinctions: The male and female are almost identical. The difference being that the male has a complete red crown and nape, whereas, the female only has a red nape. Although the Red-bellied Woodpecker received its name for having a red belly, the red is very difficult to see as it is located between its legs. Both sexes have black and white uniform barring down their backs and wings.

Voice: Has more of a call than a song, the male communicates to the female by drumming on dead twigs, limbs or hollow branches.

Nesting: Four to five white eggs, one to three broods per year, depending on the regions of the birds. Larger broods generally takes place in the more southern regions. Nests are located in tree cavities which are also used as their roost. 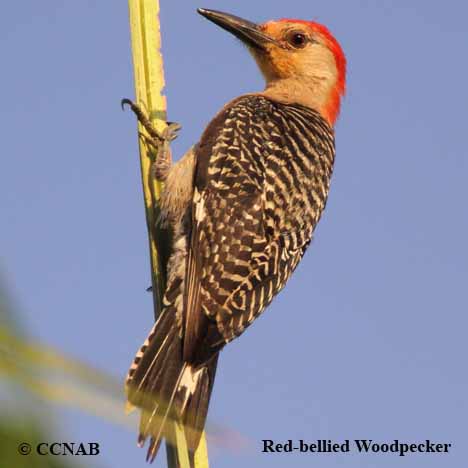 Life, Habitat and Pictures of the Red-bellied Woodpecker

Distribution: Non-migratory, although they may move during the winter months in search of food. Found throughout forests and forest edges. Seen from southeastern Quebec, through the lower parts of Ontario into the central USA states and on to eastern Texas, to the Florida tip and north.