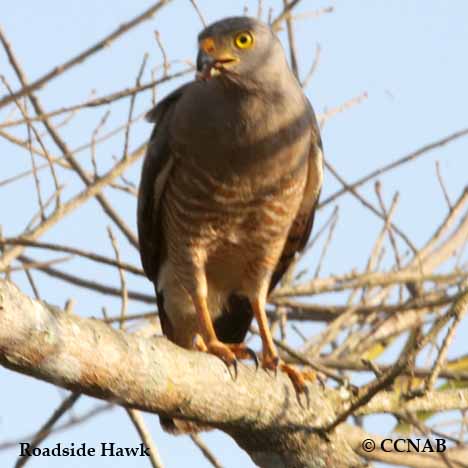 Species: The Roadside Hawk (Rupornis magnirostris) is a vagrant bird of prey seen in Texas, along the Rio Grande River in the extreme southeastern regions. This is the smallest member of the buteo family. Prefers open landscape with groves of trees. It seldom soars but is commonly seen perched along highway on fenceposts or utility wires. It has an upright posture when seen perched. Seems to be comfortable around people and shows little alarm when approached.

Distinctions: Adults are similar, females larger than the males. Mostly, grey back, head and neck, orange or reddish-brown barring on lower breast, light barring seen on the underwings. Multiple bands on tail. Underwing shows large orange patches near the wingtips. Juveniles display whiter plumage from below, grey head and back. Tail has multiple banding but not as heavy or as wide as the adults. Shows a hint of a whitish-grey supercilium. 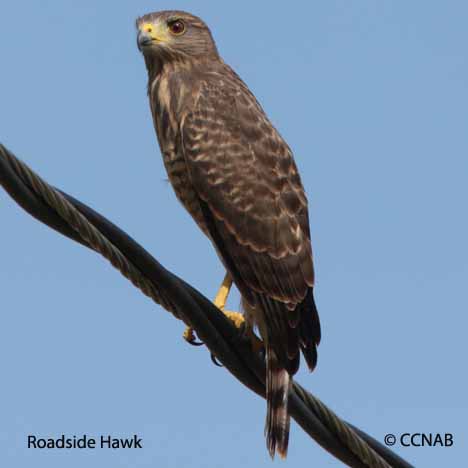 Life, Habitat and Pictures of the Roadside Hawk

Distribution: A rare visitor north of the Rio Grande River in the regions west of Brownsville, Texas. A common hawk found throughout the southern regions of Mexico, along the Pacific and Caribbean coast but not common in the central areas. Common throughout Central and South America. It prefers lower elevations from sea level up to 500 meters.