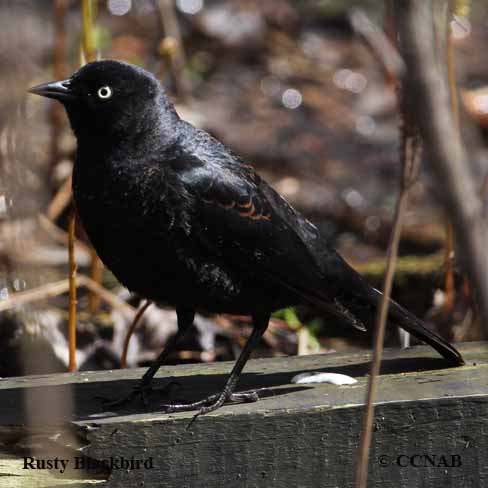 The Rusty Blackbird has an appearance between a Common Grackle and a Brewer's Blackbird. Over the recent years these blackbirds have shown a steep decline in their numbers. These are shy bird species, and not a typical blackbird one sees around people or birdfeeders, unlike other blackbird types. These birds have a dark plumage in breeding season and a rust coloured plumage in the non-breeding season.


Avibase - the world bird database This site provides the user with a complete list of bird species, broken down per country, or in the example of the US or Canada, per state and province. Here, bird species names are available in other languages, a great asset to be used as a translation of foreign bird names.

eBird - TheCornellLab of OrnithologyeBird is a must for any individual, who has an interest in birds. This site allows users to sign up and participate in recording birds seen on a daily basis as well as the location, for any bird species seen in the world. In addition, users can use the existing data to search out the location of bird species throughout the year. By using filters, information as to the movements can be determined. Photos can be added to identify individual birds. Migration pattern can be calculated using information by months or years as needed. Range maps can be verified, allowing the users to see where the presence of individual bird species are expected to be at certain times of the year.