A mounted specimen of a Slender-billed Curlew (Numenius tenuirostris) is in the Buffalo Museum of Science (BSNS 2092), obtained with the collection of Dr. I.L. Terry of Buffalo.

There was no tag attached to the specimen,(note 2) but Dr. Terry's son, Dr. I.L. Terry Jr., told us that his father had shot the bird at Crescent Beach, Ontario, many years ago. He also referred us to his friend, Mr. W.R. Harris of Annandale, Virginia, who is the son of the hunter companion of Dr. Terry's father. In a letter dated September 19,1962, Mr. Harris stated: "With reference to your European Curlew, this bird was shot by Dr. I.L. Terry, about 1925 at Crescent Beach, Ontario, Canada. The exact locale was on the east side of the point in the western end of Crescent Beach Bay. The area there is marshy and used to be frequented by many snipe, plover and so forth. This bird was mounted by the man who was then associated with the Buffalo Museum of Science and his name was Mr.Santens (I am uncertain of the spelling of this name, but I do remember that this man was of Belgian extraction). The time of hear, I should mention, was to the best of my recollection, in the fall, probably in October or early November." In a later letter dated August 8, 1963, Mr. Harris gave us this added information: "I was not with Dr. Terry at the time he shot the Curlew in the field. I was at the house when he and my father, who is now deceased, returned with the bird. I remember that there was considerable discussion about it and as I recall, the positive identification of the species was made by Mr. Santens.(note 3) I know that Mr. Santens mounted the bird, for I saw it many times at Dr. Terry's home... The reason the bird was mounted was because it was an unusual species and Mr. Santens was interested in helping Dr. Terry develop a bird collection." This was the only specimen of a European bird in Dr. Terry's collection.

Measurements of this mounted specimen are given in the first column, and figures for ten males of this species taken from Witherby et al.(note 4) are listed in the second column, as follows:

2. Dr.Terry originally had a tag on all his specimens, but after being warned by a friend that some of the specimens might have been taken illegally because of new laws covering the taking or possession of migratory birds without a permit, he removed all the tags from the specimens.

3. Apparently Santens originally identified the specimen as a European [=Eurasian] Curlew (Numenius arquata) when it was brought to him for mounting, possibly not having a description or measurements available of the Slender-billed Curlew (N. tenuirostris), which it resembles superficially. He knew, however, that it was an exptoc species, unlike any of our native curlews. 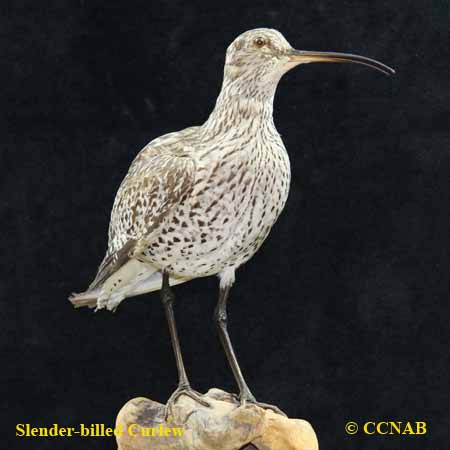 Images of the Slender-billed Curlew are courtesy of the Buffalo Museum of Science in Buffalo, New York, USA.

Life, Habitat and Pictures of the Slender-billed Curlew 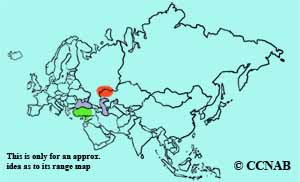 The photograph shows some of the heart-shaped spots on the breast which helped to identify this species. The Slender-billed Curlew breeds in the steppes of western Asia, northern Kazakhstan and western Siberia. It winters in Iraq, the eastern Mediterranean area and northwestern Africa. A straggler in western Europe,(note 5) it is a relatively rare bird in its normal range and some ornithologists believe that it may be on its way to extinction.