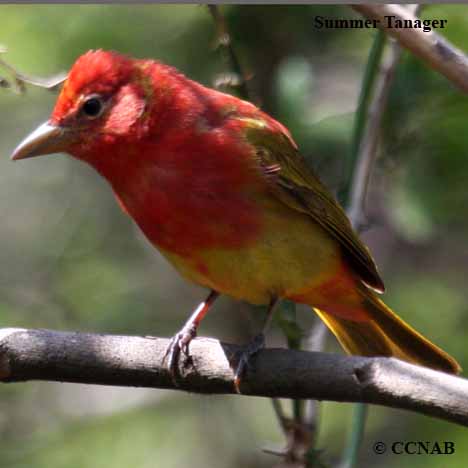 Species: The Summer Tanager (Piranga rubra) is seen across the southern regions of the USA. The beautiful male is recognized by its completely red body and is the only bird species in North America like this. Their diet, like most tanagers, consists of bees and other types of insects. They are sometimes seen at birdfeeders, attracted by fruit and/or fatty suet.

Distinctions: Sexually dimorphic, the male has a completely brilliant red body, retaining its red plumage throughout the year. The male tanager has a large yellow bill that is perfectly adapted for capturing and eating bees, wasps and hornets. The Summer Tanager has no crest and its brighter red plumage distinguishes it from the Northern Cardinal. The female has a light olive-coloured mantle, with a light coloured yellow breast. As in most cases, the juvenile is similar to the female's plumage in its first year.

Voice: Repeated three to seven notes lyrics, call consists of three notes that are easily recognizable, once seen and heard. 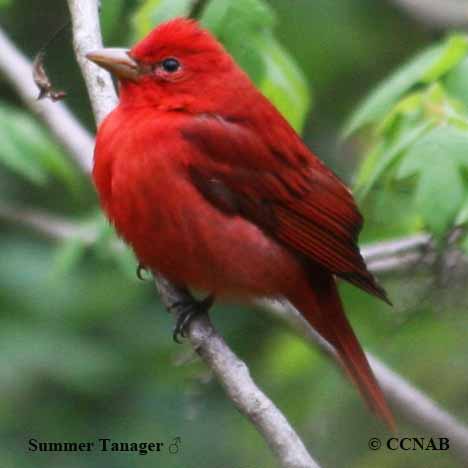 Distribution: These tanagers are found throughout wooded areas. They are consistently seen in small numbers, along the southern borders of central Canada, with the odd reports in the eastern provinces of Canada, west into the central USA states, and a narrow band reaching into California and east to the tip of Florida.