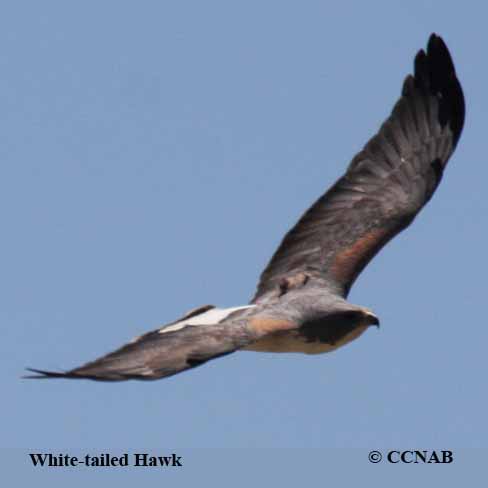 Species; The White-tailed Hawk (Geranoaetus albicaudatus), is a Texas rarity. It is seen only in the southeastern corner of the state, being the most northerly extension of their population. Can be observed from southern Argentina, north through South America, into Central America and Mexico. Prefers to perch when hunting, seen along highways perched on utility poles, fence posts and trees. Has been known to patrol the perimeters of grass fires, preying on small animals, reptiles and large insects, fleeing from the burn.

Distinctions; Male and females are similar, has a light and dark morph, light morph has grey back and head. Long wings, mostly white underneath, black wing tips, dark tailing edge of underwings. Large rufous wing patch, seen both when perched or flying. White tail, above and below, black subterminal band with white tail tip. As many as four yearly cycles, before reaching mature plumage. Juvenile has dark coloured body, noticeable multi-bands on tail, strong streaking on breast.

Voice; Similar to other hawks' cries, sounds like "ke-ke-ke".

Nesting; Two to three white eggs, one brood per year. Nest built off the ground, usually on a small sturdy tree or shrub in an open landscape, with a view of the surrounding areas, constructed with branches, twigs, grasses and other plant materials. 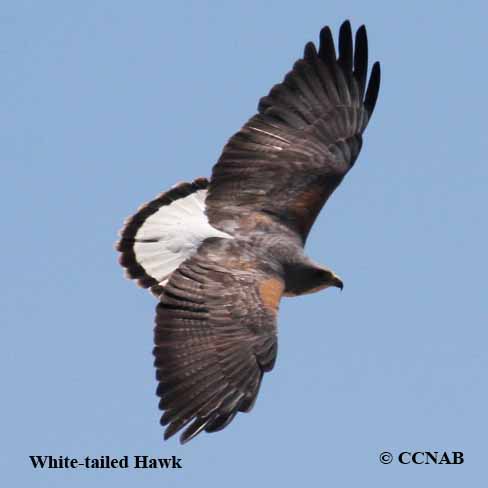 Life, Habitat and Pictures of the White-tailed Hawk

Distribution; Texas population does not migrate, locally present around Brownsville, situated in the extreme southeast corner of Texas, branching out into the open semi-arid scrub lands. 200 and more nesting pairs have been identified in surveys, population appears stable. More common throughout eastern Mexico and into Central America.