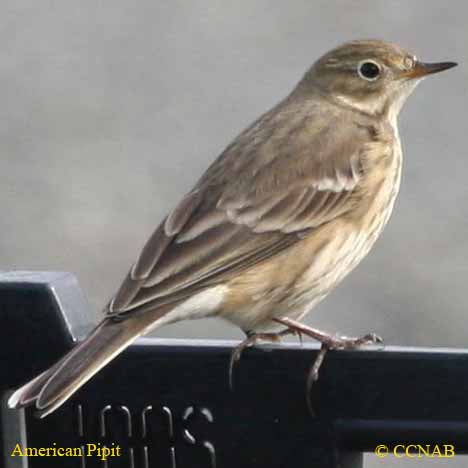 There are at least four types of pipits found or seen in North America. They are the American Pipit, Sprague's Pipit, Red-throated Pipit and the Olive-backed Pipit. Of this group, the American Pipit is the most common and widespread. The Sprague's Pipit lives in the central states and is a prairie bird whose habitat is being lost to agriculture and industrial development, raising concerns for its declining numbers. The Red-throated Pipit can be found on the western shores of Alaska and on the islands of the Bering Sea, as well as the Olive-backed Pipit who is a vagrant and seen during the migration periods.

The pipits are another group of the known bird species that are more often heard than seen. In their early breeding season, pipits are seen high in the skies, executing flight aerials and flight calls.