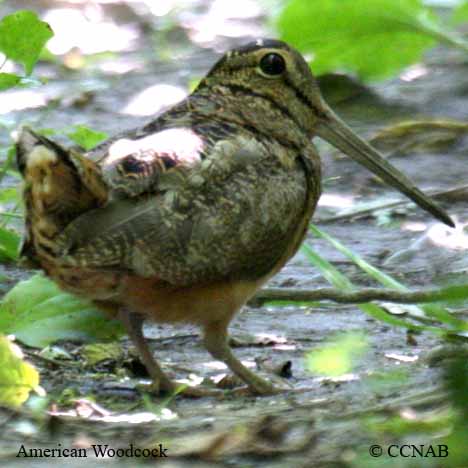 The American Woodcock is the only native woodcock species seen in North America. The Eurasian Woodcock has been reported and is a recognized vagrant to the North American continent. Both these woodcock species prefer a forest-type habitat that has a wet and damp forest floor. These gamebirds are similar in size to the snipes. Both bird types have long bills, which they both use to probe the soft earth with.

The woodcocks can be distinguished from the snipes. The woodcocks have dark bold stripes from one side of their crown to the other side. The snipes have dark bold stripes running from the front of their crowns to the back of their heads. When a woodcock takes flight in the forest, its wings makes a whirling noise and its take off resembles a helicopter, as it leaves the forest floor vertically into the sky, flying over the smaller trees.