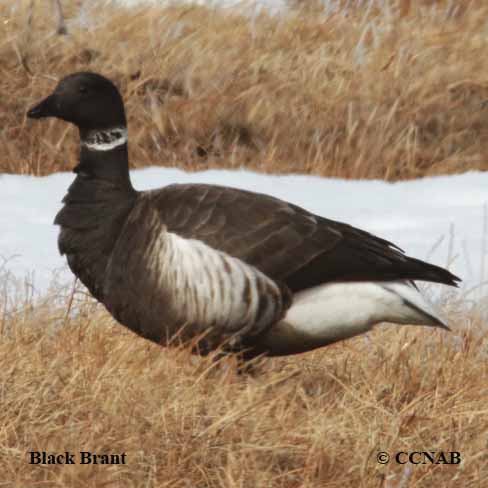 A variety of sub-species in the Brant family are seen in North America. These sub-species or races range in colours from dark black through to very light shades of grey. The Black Brant is a native goose of the northwestern regions of the continent. These colours tone down in shades of grey as they are seen, going from west to east in North America, to the very light coloured Pale-bellied Brant of the Atlantic regions. These birds can also be seen with brown plumage. Brant breeds on the tundra and the high arctic arriving on the nesting grounds when there are still signs of snow and ice.

Brant is a member of the goose family and is considered one of the smaller geese seen on the continent. Unlike most geese, Brant do not fly in an organized "V" pattern but bunch together like flocks of birds, such as the blackbirds. They have a unique call which makes them easy to recognize.