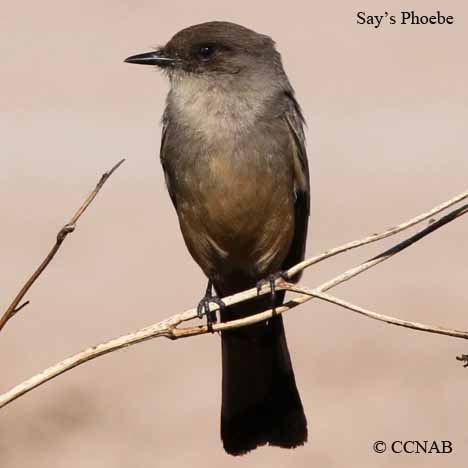 Species: The Say's Phoebe (Sayornis saya) behaves in the same manner and has many of the same habits as its eastern species, the Eastern Phoebe. Both species are apt to nest around older homes, sheds or any other type of structure. It is an insect eater able to catch its prey in the air or hover over plants, picking the insects off the leaves. Unlike the Eastern Phoebe, the Say's Phoebe does not especially require water close by. It can be found in very hot and arid locations.

Distinctions: Both sexes appear similar, grey bodies, including back, head and the upper breast. Dark lores, black wings and tail. Rusty or burnt-orange coloured lower breast and rump. The juvenile is similar to adults.

Nesting: Four to five white eggs, two broods per year. Nest constructed from grass, weeds, spiderwebs and mud. Nest is attached to the sides of structures, built on shelves or to the side of cliffs or bank ledges. 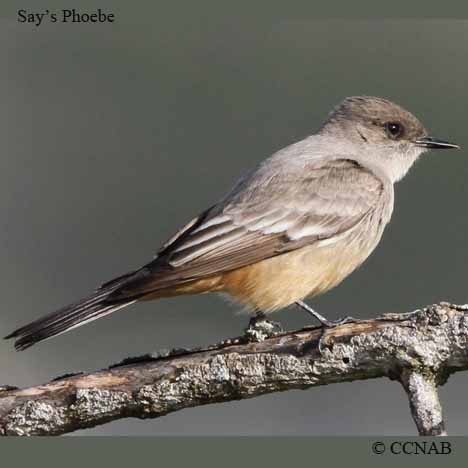 Distribution: The Say's Phoebe prefers a drier climate and it is not uncommon to see it away from water. It is seen throughout the western North American continent where it prefers the mountainous terrain. It is not seen along the Pacific coast but is observed from north-central Alaska to southern California, east to Texas and north to the Dakotas, into Manitoba and across the prairies to northern British Columbia.